Richen Europe S.r.l. is a Pharmaceutical Company founded in 2014 as a subsidiary of the RICHEN MEDICAL SCIENCE GROUP and reference for the European market.

The company that has developed 13C-UBT (13C urea breath test) diagnosis system in 2004, featuring the following scientific theories of modern medic treatment: non-invasive, analgesia and micro-scale.
This system is characterised by safe, highly accurate, pollution-free, non-toxicant, and easily use. Since high sensitivity and specificity has become the golden standard of HP diagnosis, the infrared spectrometer thereupon has prompted the high distinguishability, completely in accordance with international concepts.

Through years of hard work, the concept of “simply take a breath and we can diagnose disease” has deeply gone into people’s mind. Richen Medical Science Group now occupies nearly 70% of market shares in domestic China, which makes it become one of the most competitive enterprises related to 13C-UBT in China, even to the world. In order to guarantee the sustainable improvement in service and quality, Richen Medical Science Group has established the system management system according to ISO9001 and ISO13485, authenticated by CMD and TUV in Germany. In addition, a number of products of our company have been registered and authorized by SFDA, and possess the CE safety certificate.
The operational headquarters of subsidiary is located in Trezzano sul Naviglio, about 3 km from from Milan city and 20 minutes from Linate Airport.

Create innovative high-tech medical instruments and devices in order to improve diagnostic and therapeutic applications in Gastroenterology and to promote patient well-being by implementing the analytical specificity of the healthcare professional.

Our CEOWho’s behind the scenes? 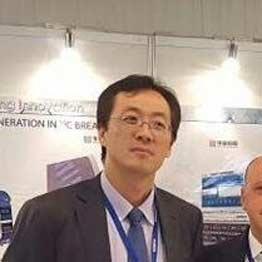 ProfessionalOur Know How and Experience at your service

QualityLiving the Innovation in Gastroenterology

We use cookies to ensure that we give you the best experience on our website. If you continue to use this site we will assume that you are happy with it.OkRead more